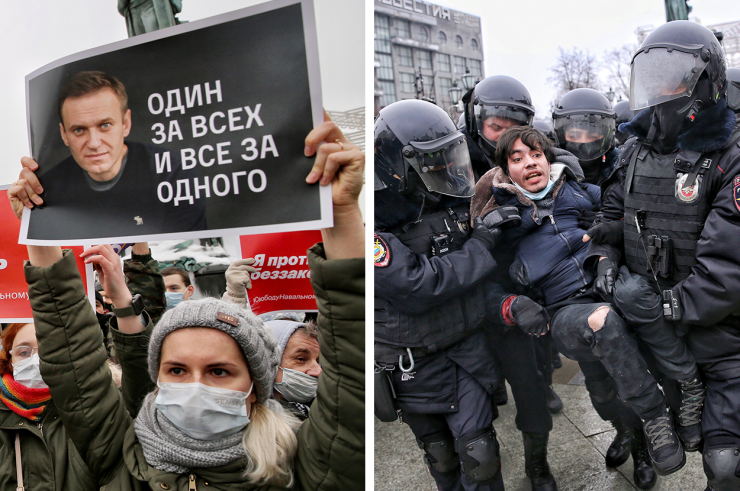 Police in Russia have arrested thousands of protesters who took to the streets on Saturday Jan. 23 in support of opposition leader Alexei Navalny, who was jailed after returning to Moscow on Sunday Jan. 17.

Navalny was detained by police officers at passport control at Sheremetyevo Airport after landing from Berlin, where he had been receiving treatment since August for a near-fatal poisoning by a military-grade nerve agent in a suspected attack by the Kremlin, and taken into custody at a police station. He was sentenced to 30 days in prison, pending a trial for violating a suspended prison sentence, the next day in a rush court hearing.

Tens of thousands of protesters turned out in almost 100 cities across entire country, some braving temperatures as low as -50˚C (-58˚F), to call for his release.

Riot police beat and dragged away protesters in Moscow. Others were beaten with batons, according to AP. More than 1,200 people were detained in the capital with a total of more than 3,100 people detained nationwide, according to OVD-Info, an activist group that monitors protest detentions. Navalny’s wife, Yulia, was also detained and shared a photo of herself in a police truck on Instagram.

The protests were in some of the largest demonstrations against President Vladmir Putin in years, the BBC reported.

Protesters have called for further protests next weekend, according to AP.