Australian prime minister Scott Morrison has formally apologized to the women who were sexually assaulted while working in the country's parliament.

Australian prime minister Scott Morrison has formally apologized to the women who were sexually assaulted while working in the country’s parliament.

Morrison’s apology is the first recommendation from a landmark independent review into parliamentary workplace culture that came after multiple women working in parliament said they had faced sexual harassment, assault and bullying.

Last February, Brittany Higgins, a former political advisor, said she had been raped by a male colleague in a minister’s office in 2019.

Higgins said she had gone to the police but dropped the complaint in April 2019 as she was worried it would result in her losing her job, according to the New York Times.

After Higgins went public, another three women said they had also been sexually harassed and assaulted by the same man between 2016 and 2020, according to SBS.

The women’s stories sparked a #MeToo reckoning in the Australian parliament, and protesters took to the streets to demand an end to violence against women.

Bruce Lehrmann, a 26-year-old man from Queensland, was later charged and will face trial this June. He has denied the allegations.

The events led to an independent investigation by Australia’s Sex Discrimination Commissioner Kate Jenkins, which found that one out of three people currently in parliamentary workplaces had been sexually harassed and 37 percent had been bullied.

“I am sorry. We are sorry. I am sorry to Ms. Higgins for the terrible things that took place here, and the place that should have been a place of safety and contribution turned out to be a nightmare,” Morrison, who was widely criticized for how he handled the events, said in a speech in parliament on Tuesday Feb. 8.

Addressing the parliament, as well as Higgins, three other staff who had gone public with their experiences and women’s rights activists seated in the public gallery, Morrison said that sorry was only the start.

“I want this building to be a place where young Australians, and young women in particular, can follow their dreams, can live out their beliefs and not have them crushed by brutality and the misuse of power,” Morrison said.

Opposition leader Anthony Albanese also offered an apology to Higgins and other victims on behalf of the Labor Party.

You have torn through a silence that has acted as the life support system for the most odious of status quos,” Albanese said.

Speaking a day after the apology, Higgins said in a speech that she recognized the moment’s significance but was concerned the government “had only learnt how to be better at talking about the issue,” Reuters reported.

“Actions are what matter,” Higgins said. “Task forces are great. Codes of conduct are important. But only if it’s paired with institutional change.”

The government has said it will introduce legislative changes recommended by the Jenkins review before elections in May.

Peru’s interim president, Manuel Merino, has resigned after five days in office. He made the announcement on Sunday Nov. 15, after days of nationwide protests against the impeachment of the popular president Martín Vizcarra on Monday Nov. 9. 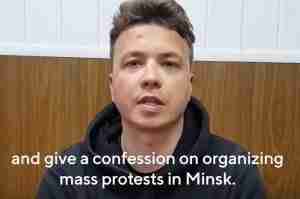