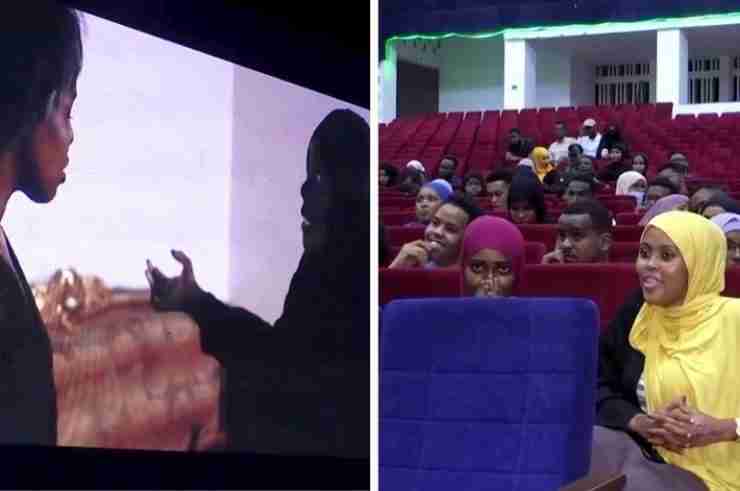 Somalis enjoyed the first public film screening in three decades at the country’s National Theatre in the capital Mogadishu on Sep. 22, symbolizing hopes for a cultural revival in the war-torn country.

Before the civil war broke out in 1991, Mogadishu housed numerous cinema halls, including the National Theatre, which was built as a gift from Mao Zedong in 1967.

As the war began, clan-based warlords fought over the theater, resulting in its collapse a year into the conflict.

It became a target for suicide bombers and a base for warlords throughout the war.

In 2006, al-Qaeda-linked Islamist militants seized control of the building, banning all forms of entertainment they considered sinful.

The venue reopened in 2011 but was blown up by al Shabaab jihadists three weeks later, killing six people.

After restorations, it was reopened again in 2020.

Two films by Somali director Ibrahim CM were shown at the theater at the first public screening.

Tickets for the films — Hoos and Date from Hell — were sold for $10 each.

Filmgoers also went through several security checkpoints before arriving at the theater, which is located inside a complex that includes the presidential palace and the parliament.

“This is going to be a historic night for the Somali people: it shows how hopes have been revived … after so many years of challenges,” theater director Abdikadir Abdi Yusuf said, Guardian reported.

“It’s a platform that provides an opportunity to… Somali songwriters, storytellers, movie directors and actors to present their talent openly.”

The screening reminded many Somalis of happier times before the civil war.

“It makes me feel bad when I see Mogadishu lacking the nightlife it once had. But this is a good start,” he added.