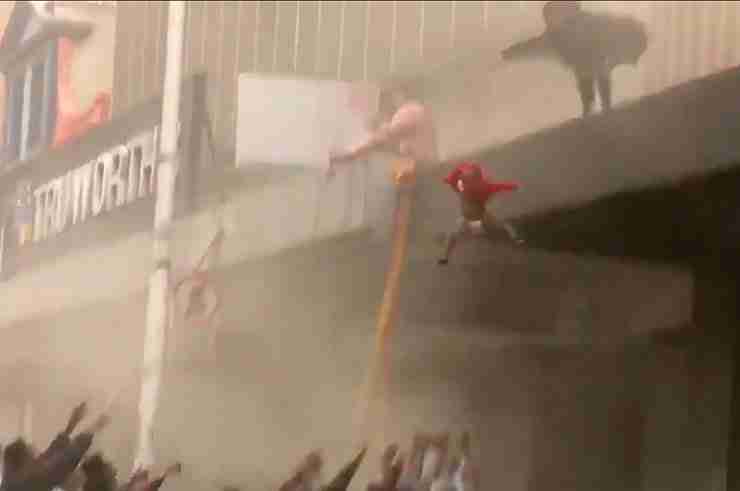 Footage of a mom in South Africa throwing her two-year-old baby off a burning building to safety during riots in the country on Tuesday July 13 has gone viral on social media.

The mother, 26-year-old Naledi Manyoni, told Reuters that she had been in her home on the 16th floor of the building in Durban when it was set on fire by looters protesting the jailing of former South African president Jacob Zuma.

She ran down the stairs with her daughter, Melokuhle, but was unable to get to the ground floor as the area was locked, she told the BBC.

“They kept screaming ‘throw her and they kept helping me,” Manyoni told Reuters. “A woman came close but I didn’t trust her cause she was alone so they started coming together until there were a lot and I threw her and I was afraid.”

Manyoni said she held her head in shock after she threw Melokuhle, but the people below managed to catch her.

“What was important was for my daughter was to be out of that situation,” Manyoni said. “All I wanted was for her to be saved. I couldn’t escape alone and leave her behind.”

She was reunited with Melokuhle after people in the crowd started using ladders to rescue other residents and firefighters arrived at the scene about 20 minutes later.

“She kept saying ‘mama you threw me down there’, she has been scared and restless at night,” Manyoni said.

The riots started after Zuma turned himself into police last Wednesday July 7 to serve a 15-month prison sentence for contempt of court. The 79-year-old, who ruled South Africa from 2009 to 2018, was sentenced in June after he refused to show up to an inquiry investigating alleged corruption during his time in office.

After he turned himself in, protests broke out in Zuma’s home province of KwaZulu-Natal on Saturday and soon turned into mass looting, arson and riots in Durban and Johannesburg, fueled by job layoffs and economic inequality worsened by the COVID-19 pandemic, CNBC reported.

Rioters broke ATMs and into restaurants, liquor shops and clothing shops. Some shopping centers have been completely ransacked and set aflame. The mass looting and burning has led to a shortage of basic necessity.

At least 117 people have died and almost 1,500 people have been arrested in one of the worst upheavals in South Africa since the end of apartheid in the 1990s.