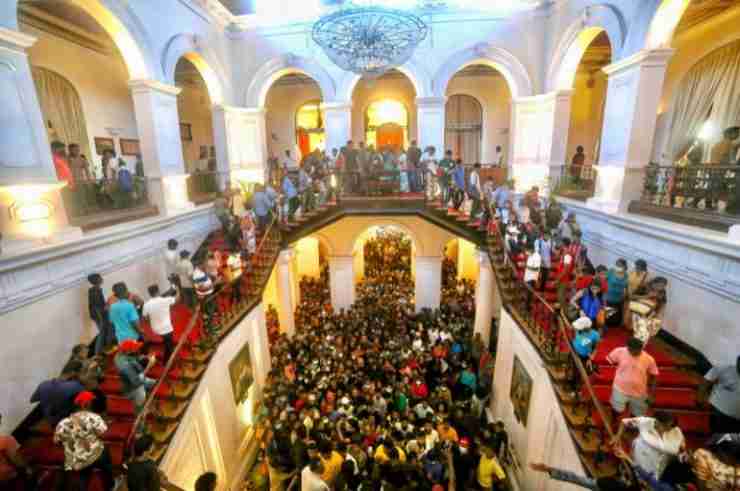 Sri Lanka’s president has finally agreed to resign, officials said on Monday July 11, two days after thousands of protesters stormed his residence and set the prime minister’s home on fire.

People across Sri Lanka have been holding mass protests since March demanding president Gotabaya Rajapaksa resign over his handling over the country’s worst economic crisis since independence in 1948.

Sri Lanka has been facing an ongoing economic crisis due to years of accumulated foreign debt, compounded by the 2019 Easter bombings and the COVID-19 pandemic, which ravaged the tourism industry, a major source of income for the country.

The accumulation of foreign debt has sent the economy spiraling, with citizens bearing the brunt of runaway inflation rates, fuel and medicine shortages and rolling blackouts.

The country is struggling to import essential goods, putting more than a quarter of the country’s 21 million population at risk of food shortages, according to the United Nations.

It has to repay $4 billion in debt this year, CNN reported.

Rajapaksa, whose family has dominated Sri Lankan politics for the last twenty years, has been accused of gross mismanagement of the country and widespread corruption.

Three of his brothers and a nephew have all stepped down from their government posts since the protest broke out. However Rajapaska has held on until now.

On Saturday July 9, demonstrators converged on the country’s capital of Colombo, breaking through police barricades to enter Rajapaksa’s residence.

Videos and photos showed people filling up the staircase of the building and chanting for the president, who had fled earlier in the day, to resign.

Protesters cooked curries in the kitchen, lay down on the beds and sofas, exercised in the gym and swam in the outdoor pool.

By nightfall, Prime Minister Ranil Wickremesinghe’s home was set ablaze, despite his offer to resign and form an all-party government earlier in the afternoon.

At least 55 people were injured, a doctor at the National Hospital of Sri Lanka said.

On Sunday, Rajapaksa announced he would resign on Wednesday July 13.

Under the Sri Lankan constitution, the Speaker Mahinda Yapa Abeywardena will serve as acting president while parliament elects a new leader in the next 30 days.