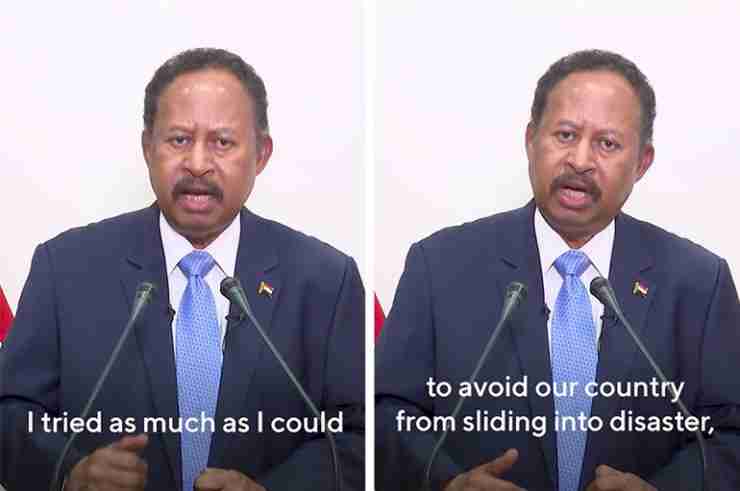 Sudan’s prime minister Abdalla Hamdok has resigned a month after he was reinstated in a power sharing deal with the military, which seized power in a coup in October.

The news comes during mass protests against the military coup and the subsequent power sharing deal.

Protesters see the deal as a concession to the military, which has controlled Sudan for most of its more than 60 year history, the New York Times reported.

“I tried as much as I could to avoid our country from sliding into disaster. But despite my efforts to achieve the desired and necessary consensus to give citizens security, peace, justice and to stop bloodshed, that did not happen,” Hamdok said in a televised address on Sunday Jan. 2 as he announced his resignation.

He said his resignation would allow someone else to lead the country to complete its transition to a civilian, democratic country, calling for dialogue.

“Our country is going through a dangerous turning point that may threaten its entire survival if it is not remedied soon,” he said.

Under the agreement in November, Hamdok was supposed to lead a cabinet of technocrats for a transitional period with military oversight before elections can be held to hand power to a civilian government.

However, it was unclear how much power the government would hold, AP reported, and widespread protests continued, with security forces opening fire on protesters and killing at least 57 people since the coup.

In a televised address on Sunday evening, Mr. Hamdok said that repeated mediation attempts had failed in recent days and that the country needed to engage in a new dialogue to to chart a path toward a democratic, civilian state.

The military had seized power on Oct. 25, while it been sharing power with civilian leaders in a transitional government for over two years after overthrowing the country’s long-time dictator Omar al-Bashir in 2019.

The coup, which initially placed Hamdok under house arrest, came just weeks before the coup leader, Lt. Gen. Abdel Fattah al-Burhan, was supposed to surrender his position leading the Sovereign Council to a civilian, which would have put Sudan under full civilian control for the first time since 1989, according to the New York Times.

Further protests calling for a restoration to civilian rule are planned in the coming days.