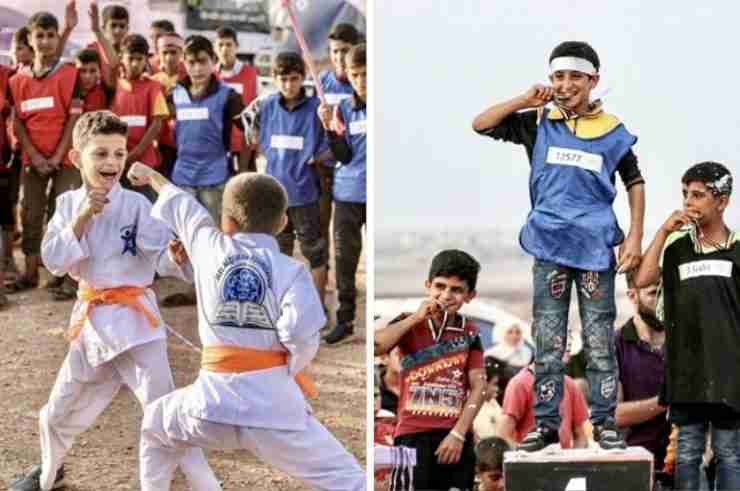 120 boys from 12 different camps in the tent settlement of Yaman near Idlib, Syria, gathered to take part in their very own Olympics on Saturday Aug. 7.

Each wearing their camp’s color, the boys, aged between eight to 14, participated in “homemade” Olympic events such as javelin, hurdles, sprint, high and long jump, gymnastics, martial arts, volleyball and football.

There was even a “horse racing” event, when participants would hold a cutout of a horse’s head to their chests and run as fast as they can.

“We had such fun,” Walid Mohammed al-Hassan, 12, told AFP. He represented his camp in the long jump.

“I won second place,” he said as he grinned from ear to ear and his three teammates huddled around him after his win.

One of the organizers, Ibrahim Sarmini, told AFP the “Tent Olympics 2020” were created to give children some hope and “to introduce the kids to different kind of sports that we, as a society, hadn’t really tried before.”

The sporting event, held in conjunction with the Tokyo Olympics, also hopes to draw attention to the conditions in camps for people who have been internally displaced due to Syria’s civil conflict.

“The main aim was to shine a light on the camp residents, children and adults, who are living a very tough life,” a representative of the Syrian charity Benefits said.

The Idlib region is home to nearly three million people. Two-thirds have been internally displaced from other parts of the country during the ten-year-old conflict.

The majority of those who have lost their homes live in camps dotted across the region, depending on humanitarian aid to survive and battling cold and floods in winter.

At the Tokyo Olympics, Syrian athletes competed as part of two teams, with six on the national team, and nine on the international Olympic Refugee Team.

“It’s sad to see young Syrians taking part as refugees,” Sarmini said. “But it’s great for us that there are real free heroes to represent the people here in northwest Syria at the Olympics.”

During the Games, weightlifter Man Asaad earned a bronze medal for Syria.