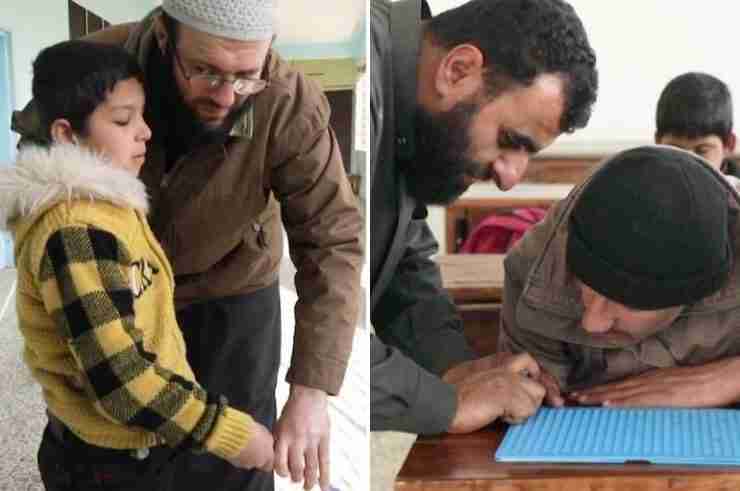 In Idlib, Syria, “Sighted Hearts School” has given hope to children who are visually impaired, as it is the only school in the area who specifically caters to them.

Founded a year ago, the school now has over 100 students who are taught by teachers with similar impairments. The teachers have all learned Braille language in Aleppo prior to 2011.

“At the beginning, we faced difficulties because almost all students and the entire school staff are visually impaired but thank God, we were able to pass these difficulties. The aim of this school is to get visually impaired people out of the isolation and introvert situation they suffer from. We also work on improving their cultural and educational level, and support them psychologically so they can become more active in society and independent,” Abdul Razzaq Al-Ahmad, one of the teachers at the school who is visually impaired, said.

At “Sighted Hearts School”, students are taught the Braille language, Arabic, mathematics, and also how to get used to walking around with canes.

Not only does the school struggle to deal with both students and teachers who are visually impaired, but they also encounter a series of other challenges.

There is a lack of school resources, as they offer both education and transport for free, but only receive limited funding from one of the local organizations.

The school is also located in an area where violence and bombardment are rampant.

“I go to school in Idlib,” says Zakarya Al-Youssef, a 16-year-old boy who is visually impaired. “The situation at home was better than the camp’s, the situation in the camp is more difficult than at home. Life in camps is difficult, it’s easier in homes than the camp. I go to school three times a week, I go study until noon then come back.” Zakarya walks 20 kilometers three times a week to go to school, with hopes of improving his skills and being able to merge in society.

“The conditions in the camps are difficult, even for those who do not have any disabilities, so imagine what it is like for those who do?” Zakarya’s father, Ali Al-Youssef, said. “For someone like Zakarya, it is very hard for him, life is very difficult, his suffering is harsher. This is how we are living.”