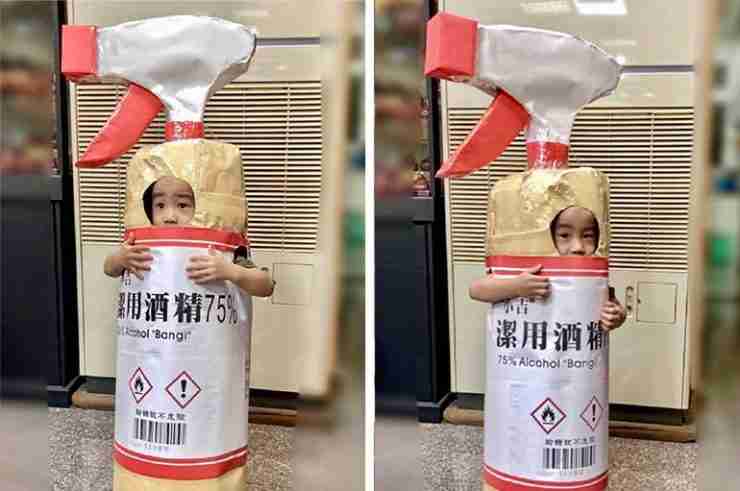 Meet Hsiao-chi, a three-year-old boy from Chiayi, Taiwan, who dressed up as a sanitizer spray bottle for Halloween.

Due to the COVID-19 pandemic, Hsiao-chi’s parents came up with the idea to dress him up as the popular sanitizer spray bottle with a red and white nozzle commonly used in Taiwan.

Made of card and cardboard boxes that cost less than NT$100 ($3), the front of the costume reads “75% sanitizing alcohol”, with the same warning labels as the original product.

The brand name of the alcohol spray was changed to “Hsiao-chi”, and below the warning label, the tagline reads, “There is no danger in giving it candy.”

Hsiao-chi’s parents had initially planned on dressing him and his older brother Winnie as a sanitizer spray bottle and the COVID-19 virus respectively, Hsiao-chi’s mom, JJ, told Almost.

However, when they started making the bottle costume, they soon realized how difficult it was and “immediately gave up” on the idea of making the COVID-19 virus costume, JJ said, laughing.

After they spent over three days and “nearly died” creating the costume, JJ said she and her husband decided to create a simpler version of the spray bottle costume for Winnie instead.

“Hsiao-chi is only in kindergarten so when we told him he was going to dress up as a sanitizer spray bottle, he didn’t understand but agreed,” JJ said.

“When we showed him the final product, he was terrified by how big the bottle was,” she added.

“He probably had no idea what was going on, but Hsiao-chi is a sweet boy so he cooperated and put it on any way,” JJ said, laughing. “He looked so helpless in all the photos the school took.”

His school loved the costume so much that Hsiao-chi’s teacher even took the costume after the Halloween party and put it on display at school, JJ said.

JJ shared the photos into a Facebook group called “Everyday breakdowns when you have a boy at home”, where the post went viral, gaining more than 11,000 likes.

“I didn’t expect it to go viral, because all the other costumes were amazing,” JJ said. “I just wanted to share this moment.”

Last year, JJ and her husband dressed Hsiao-chi and Winnie as an electricity pole and a traffic cone.

They have not yet decided on the boys’ costumes for next year, JJ said.