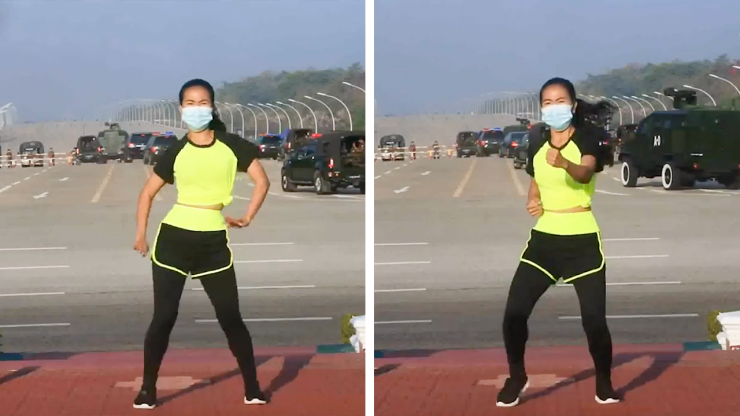 Khing Hnin Wai, a PE teacher, was filming her dance routine on a roundabout on the main road leading to Myanmar’s parliament complex in the capital, Nay Pyi Taw, on Monday morning when she inadvertently captured the beginning of a military coup that saw the military detain the country’s leader Aung San Suu Kyi, taking power and declaring a year-long state of emergency.

As she danced, a convoy of armored vehicles and SUV can be seen driving towards the parliament behind her.

The military has accused Suu Kyi’s party of fraud over its recent election win.

Khing has been posting videos of her dancing in the same location on social media for months, and this particular video she uploaded on Feb. 1 went viral on Facebook, with more than 76,000 likes and 24,000 shares.

“I wasn’t dancing to mock or ridicule any organization or to be silly. I was dancing for a fitness dance competition,” Khing wrote in a later Facebook post. “As it isn’t uncommon for Nay Pyi Taw to have an official convoy, I thought it was normal so I continued.”