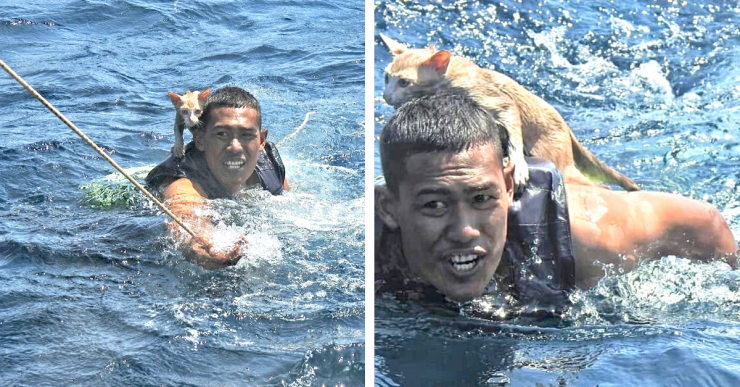 The Thai navy has rescued four ginger kittens from a burning fishing vessel in the Andaman Sea.

The human crew aboard had already been rescued by a passing fishing ship when they jumped into the sea from their vessel, which caught fire and started to sink about 13 kilometers (eight miles) off Koh Adang island.

The navy discovered there were four forgotten felines on board when they were sent back to the site to check for oil spills.

The First-Class Petty Officer Wichit Pukdeelon said he “used [his] camera to zoom in to the boat” and found the cats huddled together on a wooden beam, according to the BBC.

Tasspon Sa-ei, a sailor, then swam out to the capsized vessel and carried the cats on his back to bring them back to safety.

Photos of the rescue were shared on social media and went viral, with people praising the navy.

The navy said the four cats are being taken care of and recovering at their command post, Reuters reported.

Authorities are still investigating the cause of the sinking, Coconuts reported.