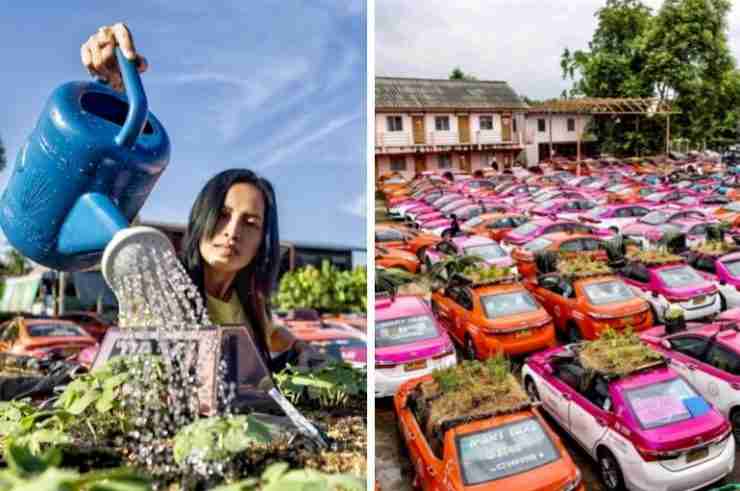 A parking lot of taxis abandoned in Bangkok, Thailand, as a result of the COVID-19 pandemic have been transformed into a vegetable garden to help feed taxi drivers who have been put out of work.

Due to the country’s tough COVID-19 lockdown, the streets of the capita, which relies heavily on tourism, have almost come to a standstill, forcing taxi drivers to give up their cars and to return to their home villages.

“Some left their cars at places like gas stations and called us to pick the cars up,”  Thapakorn Assawalertkul, one of the company owners, told NPR.

With new surges of the virus this year, the cooperatives were “completely knocked out,” as thousands of cars were given up by their drivers, he added.

As a result, two taxi cooperatives decided to turn the roofs of the vehicles into miniature vegetable gardens.

After stretching black plastic bags across bamboo frames and covering them with soil, workers planted a variety of crops such as aubergines, chillies, cucumbers, courgettes and basil.

The vegetables are intended to help feed the drivers who have been put out of work, with any additional harvest sold to local markets.

“This is our last option,”Thapakorn told AFP. “The vegetable garden is both an act of protest and a way to feed my staff during this tough time.”

“Growing vegetables on top of the roofs will not damage the taxis since most of them have already been damaged beyond repair. The engines are broken, and their tires are flat. There’s nothing that could be done,” Thapakorn said.

The situation has left the cooperatives struggling to repay the loans used to purchase their fleets, which amount to about $60.8 million,Thapakorn told NPR.

“If we don’t have help soon, we will be in real trouble,” he told AP.