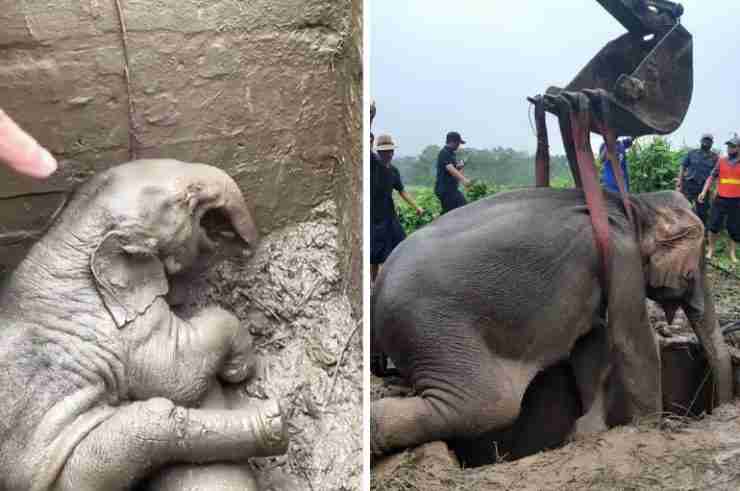 The incident was reported to wildlife officials, who responded on the morning of Wednesday July 13, according to local newspaper Bangkok Post.

Upon arrival, they found the young creature had fallen into a man-made hole about two meters deep at the Khao Yai National Park in Nakhon Nayok, Thailand.

The baby’s mother was seen pacing anxiously around the pit, unable to save her child.

According to a tweet from the Department of National Parks, Wildlife and Plant Conservation, the mother was sedated to allow the rescue mission to continue but fell after being shot.

“It was impossible to get near the baby while the mother was nearby so we gave her three doses of tranquilizer but she moved towards her baby before passing out and hit her head,” Khao Yai National Park Department vet, Dr. Chananya Kanchanasarak, told Sky News.

She was eventually pulled up from the pit with the help of a crane.

Video footage showed the calf struggling to get out as the volunteers hoisted the mother up with heavy machinery.

Around 8:30 am local time, the baby was reunited with his mother after staff and volunteers created an incline plane for it to climb his way out of the pit.

Authorities have reported both mother and baby have safely returned to the jungle.