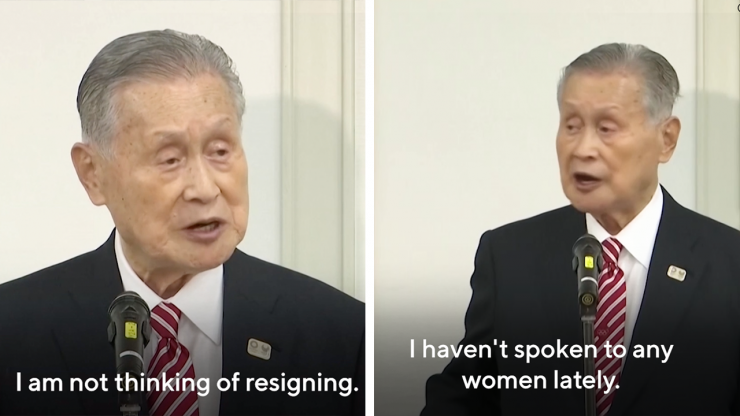 Japan’s former prime minister and the head of the Tokyo Organizing Committee of the Olympic and Paralympic Games, Yoshiro Mori, has apologized after he said that women can’t stop talking in meetings.

“Somebody told me that if we increase the number of women (on the board), we have to also restrict their speaking time to an extent. Otherwise, they’ll never stop, which is problematic,” Mori said at a Japanese Olympic Committee meeting on Wednesday Jan. 4, according to local media.

His comments triggered public outrage, and the hashtag #MoriResign started trending on Twitter.

On Thursday, he retracted the comments and said they were not in line with the spirit of the Olympics and Paralympics, but added that he did not intend to step down.

Mori told Japan’s Mainichi newspaper that his women family members – his wife, daughter and granddaughter – had all scolded him for his comments, according to the BBC.

When asked at a press conference on Thursday if women Olympic board members talk for too long, Mori said “I don’t talk to women that much lately, so I don’t know.”

In 2019, the Olympic Committe set a goal of raising the number of women on the board of directors to 40%. Currently, only five out of 24 members are women, which is approximately 20%.

In response to the controversy, Japan’s Olympic Minister, Seiko Hashimoto, said the Olympics’ “fundamental principle is to promote women’s advancement in sport at all levels and organizations in order to realize gender equality,” adding that she would have a discussion with Mori about his comments.