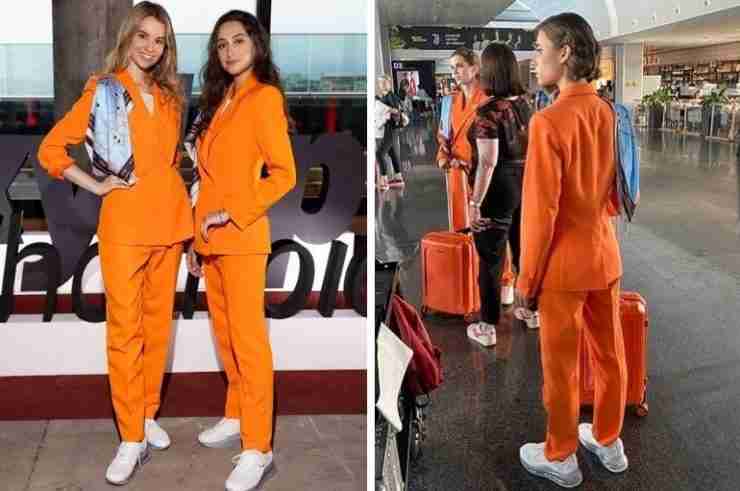 Women flight attendants from SkyUp Airlines, a budget airline in Ukraine, are now allowed to wear trainers and trousers as part of its newly reformed dress code.

A survey of its crews revealed several complaints from its women employees about their uniform, which consisted of high heels, tight blouses, and pencil skirts.

Daria Solomennaya, a 27-year-old SkyUp flight attendant, told the BBC that many of her colleagues’ toes and toe-nails were constantly damaged from spending 12 hours on their feet in heels every day.

Following the survey results, SkyUp worked with a fashion consulting company to create a new uniform that puts emphasis on both comfort and style.

Instead of suits with pencil skirts, the uniform now consists of trouser suits and trench coats made of Italian eco-leather, created by Ukrainian fashion brand GUDU.

High heels have been replaced with the Nike Air Max 720 sneakers, which are made from 75% recycled materials and features a high air cushion along the entire length of the sole.

The orange outfits are accented with a sky-blue silk scarf, makeup in shades “inspired by the sky” and a bright orange suitcase.

“Times have changed, women have changed, so in contrast to the conservative classics, heels, red lipstick and a bun, a new, more modern and comfortable image of a “champion” has appeared,” a SkyUp spokesperson said in a press release.

“A flight attendant’s work is not that romantic. It’s hard,” the spokesperson told BBC. “We realized that our female flight attendants didn’t want to be seen as “sexualized and playful.'”

While SkyUp isn’t the first airline in Europe to change its uniforms, it is a sign of leaving behind some of the old traditions in Ukraine, a country where stereotypes have long focused on women’s physical appearances.

Previously, Ukraine’s military made its women soldiers march in high heels for a military parade rehearsal, sparking criticism from the public.