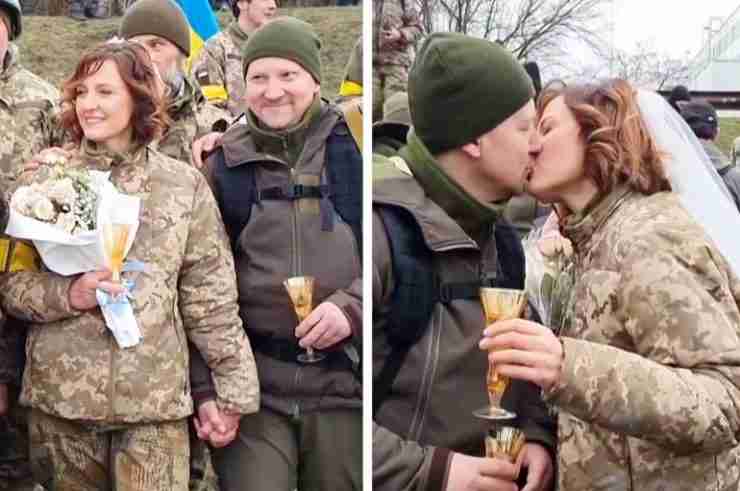 Lesya Filimonova and Valeriy Filimonov, two members of Ukraine’s territorial defense unit, tied the knot at a checkpoint on the frontlines of the war in Kyiv on Mar. 6.

The couple have been together for 20 years and have a 18-year-old daughter but had decided not to marry until now.

“We decided to get married because we live in challenging times and you never know what’s going to happen to you tomorrow. That’s why it is better to do it sooner than later,” Valeriy Filimonov, the groom, told Reuters.

Images and videos of the wedding showed the couple dressed in their military uniforms and surrounded by other soldiers and members of the press.

The wedding was also attended by the mayor of Kyiv, Vitaliy Klitschko.

“I want to give them a present from everyone, but the present for every Ukrainian is to finish the war. Every Ukrainian has one goal — to stop the war,” Klitschko said.

Russian and Ukrainian forces reached a tentative agreement on Wednesday Mar. 9 to allow civilians to evacuate six of Ukraine’s hardest-hit cities, but it’s unclear how many humanitarian corridors are actually open, according to the New York Times.

More than two million people have fled Ukraine since the start of the Russian invasion on Feb. 24, according to the United Nations.