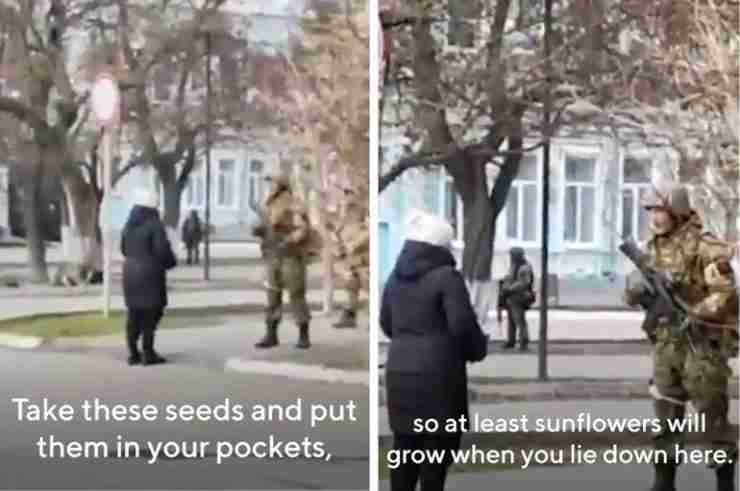 A Ukrainian woman is being praised online after she confronted heavily armed Russian soldiers in her city and offered them sunflower seeds so Ukraine’s national flower may at least “grow when he dies.”

The unnamed woman’s self-recorded clip of the incident in Henichesk went viral on Twitter after it was shared by Twitter user @ian_tanya on Feb. 24

“You’re occupants, you’re fascists!” the woman can be heard shouting in the video after she walks up to them.

Ukrainian outlet Ukraine World then shared a clip of another angle of the incident, which shows the woman standing a few meters away from a Russian soldier as she continues saying, “Take these seeds and put them in your pocket so at least sunflowers will grow when you all lie down here.”

The Russian soldiers can be heard repeatedly telling the woman that their discussion “will lead to nothing” and asking “not to escalate the situation”.

Russia began its invasion of Ukraine on Feb. 24 after Russian President Vladmir Putin declared a war to “demilitarize” its neighbor.

Russia’s invasion has been widely condemned by international organizations and multiple countries, which have imposed sanctions that are hitting the country hard.

The Russian ruble hit record lows on Monday Feb. 28, and the Russian central bank has doubled interest rates to 20%.

Russian and Ukrainian officials concluded the first round of discussions to end the war at the Ukraine-Belarus border on Monday Feb. 28, with no deal but an agreement to keep talking, according to AP.

Ukraine has also applied to join the European Union in an effort to solidify its bond with the West.