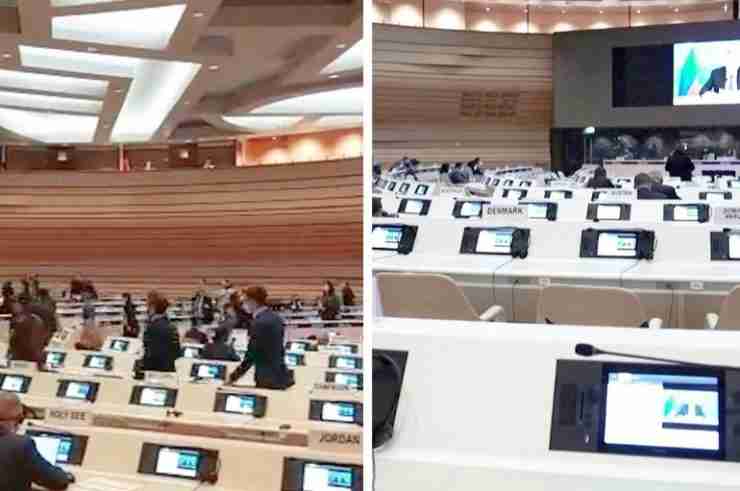 About 100 diplomats walked out of a speech by Russian Foreign Minister Sergei Lavrov at the United Nations in Geneva on Tuesday to protest Russia’s invasion of Ukraine.

Ukranian representative Yevheniia Filipenko, who led the boycott, was joined by diplomats from about 40 countries. The crowd gathered around a large Ukrainian flag outside the conference hall.

A few remained in the hall, including Russia’s ambassador and diplomats from Syria, China, and Venezuela.

Lavrov gave his speech on disarmament via video call at the UN Human Rights Council. He had planned to attend the session in person, but the EU’s bans on flights from Russia prevented him from joining.

In his address, he accused Ukraine for human rights violations against the Russian minority. He also claimed that Ukraine was acquiring nuclear weapons, calling it a “real danger,” Reuters reported.

Ukraine gave up its nuclear weapons in 1994 in exchange for security assurances from the US, the UK and Russia.

Lavrov also accused the EU of engaging in a “Russophobic frenzy” by supplying Ukraine with lethal weapons since the start of the Russian invasion on Mar. 24.

“Minister Lavrov was giving his version, which is false, about what is happening in Ukraine and so that’s why we wanted to show a very strong stance together,” Canadian foreign minister said.

“It is a remarkable show of support for Ukrainians who are fighting for their independence,” Filipenko said, Reuters reported.