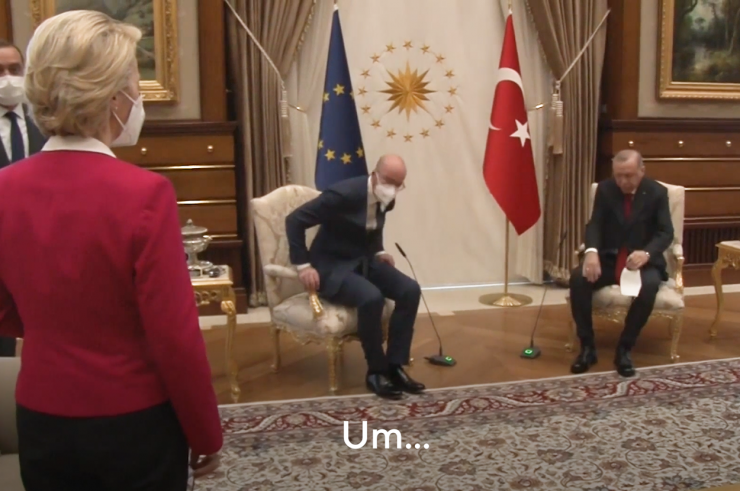 Ursula von der Leyen, the first woman president of the European Commission, was forced to sit on the sofa during a meeting with Turkish president Recep Tayyip Erdoğan and European Council president Charles Michel in Ankara, Turkey on Tuesday Apr. 7.

After the three entered the room, the two men took the two chairs that were laid out and left von der Leyen, Germany’s former defense minister, standing alone. She then ended up having to sit on the sofa. “I am the first woman to be president of the European commission. And this is how I expected to be treated when visiting Turkey two weeks ago, like, a commission president – but I was not,” she said to MEPs and Michel during a speech on Monday Apr. 26.

“I cannot find any justification for [how] I was treated in the European treaties. So I have to conclude that it happened because I am a woman. Would this have happened if I had worn a suit and a tie? In the pictures of previous meetings I did not see any shortage of chairs.” She added that she felt hurt and alone.

“This goes to the core of who we are. This is what our union stands for. And this shows how far we still have to go before women are treated as equals, always and everywhere,” she said. Ahead of Von der Leyen’s speech, Michel said he would make sure that a “protocol incident” like this would never be repeated, adding that he had not reacted at the time because he was worried about undermining the purpose of the visit.

“I have expressed my regret publicly for the situation that was created,” Michel said. “My apologies to the commission, and all those who felt offended.” He added that the council protocol team did not get access to the room before the meeting.

The Turkish government did not respond to a request for comment, Reuters reported.