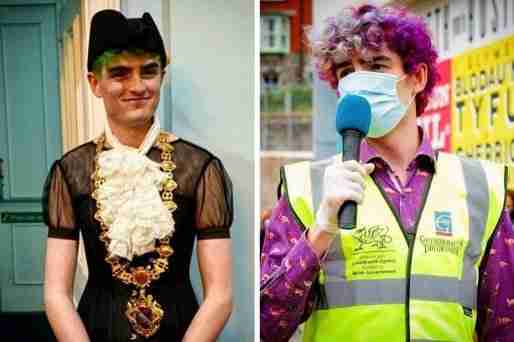 Owen Hurcum, a 23-year-old in Wales, has become the first non-binary and youngest mayor in Wales.

The part-time university student was unanimously elected the mayor of Bangor by members of the city council on Monday May 11.

Hurcum identifies as genderqueer and agender and uses they/them pronouns. They previously served as deputy mayor for a year and as a city councilor for four years.

“When I came out two years ago I was so worried I’d be ostracized by my community or worse. Today my community elected me Mayor of our great City,” Hurcum tweeted after the results. “The youngest ever Mayor in Wales. The first ever openly Non-Binary Mayor of any city anywhere. Beyond humbled, Diolch Bangor.”

“I might only be 23 but I have a wealth of experience at local government and a fantastic team behind me so I know we are set up to face the challenges ahead,” Hurcum told NBC News.

They tweeted that they will be looking to promote Bangor as much as they can, bring in investment and interest and celebrate the city’s multi-cultural community..

In an interview with North Wales Live, they also mentioned wanting to promote Bangor as a travel destination.